For the December Red Eft video, our first guest writer is Dan’s own father, poet Lucien Stryk, who became a spiritual father to me.

I have a special feeling for “Memo to the Builder,” the first poem in this video. When I was still a teen, my mother snipped it out of
the Chicago Tribune for me — she knew I’d love it.  And I still do.  In it, Lucien metaphorically imagines an architectural space with
no enclosures to shut out the living world.  In the second poem, “You Must Change Your Life,” nature becomes the protagonist in
the parable of a backyard squirrel (undistracted while fulfilling its vital needs). I find it remarkable that Lucien is able to say so much,
so powerfully — yet in so few words — about the essence of the natural world, which, if grasped, might truly change the way
we see it  . . .
— Suzanne

[For more about Lucien Stryk, see the bio and links below.]

"Memo to the Builder" and "You Must Change Your Life"

Memo to the Builder

. . . and then
After the roof goes up
Remember to lay the eave trough
Wide and deep.  A run
For squirrels and a river
For my birds.  You know, I’d rather

You made the trough
So, than have the rooftop
Tarred and shingled.  Keep
It in mind, the trough.
Also I’m not so sure of glass
In every window.  But let that pass.

Still—and there are
Reasons enough, believe me—
It would please no end to be
In and out together.
And how it would thrill me should a bird,
Learning our secret, make a whir-

ring thoroughfare
Of a room or two.
Forget the weather.  To
Have the wild, the rare
Not only happen, mind, but
Be the normal is exactly what

I’m after.  Now
You know.  Perhaps you
Think I’ve made your job too
Light?  Good.  Throw
Caution to the beams.  Build me a home
The living day can enter, not a tomb.

You Must Change Your Life

Of all things one might be:
a squirrel lopes by

busy at being himself
in a tough nutless world,

cats at his young, rain
slanting in his nest,

night falling, winter
not provided for—

no question to ask
of himself or anyone.

Lucien Stryk (1924-2013) published more than thirty books over his career, both of original poetry and Far Eastern translations, including Collected Poems (Swallow / Ohio University Press), The Penguin Book of Zen Poetry (Penguin Books, London), and Of Love and Barley: Haiku of Basho (Penguin).  He also won numerous awards and honors, such as a Ford Foundation Fellowship, Illinois Author of the Year, and a Rockefeller Foundation award.  In 2009, the American Literary Translators Association announced the inaugural Lucien Stryk Asian Translation Prize, in honor of his admired collections of Zen Buddhist literature.

For more about the Lucien Stryk, visit Dan’s article about his father at: http://www.connotationpress.com/featured-artist/november-2010/628-emeritus-artist-lucien-stryk

Posted by redefteditions at 7:16 PM 3 comments:

A Shuffling of Layers

The longer I live, the more I realize that I’ve merely glimpsed into the layers of the natural world around me.  For this reason
I was drawn to create a visual response to Dan's own thoughts about this concept in his poem "Layers."
— Suzanne

Layers
In the spirit
of E. O. Wilson

A buried secret that I’ve
stumbled on below life’s
muzzy noisiness and
haste, distracted hours
of too-often-blustery
day:  there’s something
lurking silent under
every mundane layer,
waiting to arrest
the jaded eye . . .

I  watch
the thrasher picking
through the gravel
near our shed, wonder
what’s beneath the
thrasher’s layer?  I

probe into its puffed

the beetle’s chitin
layer?  I’ve poked
beneath that layer
once before . . .
to light
upon the milk pearl
of a maggot!

I’ve
come to call life’s
MYSTERY
“a shuffling of
layers.”

Posted by redefteditions at 7:55 PM 2 comments:

This new video attempts to express our wistful homage to .  Dan and I have lived here among the Blue Ridge Mountains
longer than in any other place — so long now that we no longer feel like outlanders from the flatlands of the !


But to create this film, I needed some authentic barn imagery.  So I asked Bristol artist Val Lyle — admired for her own exhibits paying
homage to the tobacco barns of — for permission to use two of her paintings that appear in the second segment of the video,
after my own mountain and cicada images.
--Suzanne

Past molting
they cling hollow to the scaly
bark of pines;
shaped like
empty alms bowls,
those bowed & brittle
ghost-spoors

that once bore
the secret of
flight.
Life’s fragile pulse
allures me
all the time.

It beckons
like abandoned shacks
of lost tobacco-farms
passed on the
Interstate,
slumped by their rust-
crowned barns . . .
so tranquil now
& timeless,
like the rest of the world
unfolding
before it falls
away.

“Appalachian Spirit” was first published (under the title “Fading Spirits”) in the Appalachian Journal [ASU], .
The present version is forthcoming in Back to the Source: Selected Poems & Parables (San Francisco Bay Press, 2015).

Posted by redefteditions at 8:07 PM 4 comments:

Monkeys and a Millipede

Monkeys and a millipede — these are the chattering and quiet characters in Dan’s suggestive poem, “Earthworks.”
(Chattering or quiet . . . reminiscent of another species?)  When creating the video, I chose also to contrast
our pristine planet, as seen from space, with the scrambling life upon it.  And, yes, if you sense a resemblance,
my painting of the millipede in the transparent sphere was inspired by the haunting globe image in Bosch’s
Garden of Earthly Delights.
-- Suzanne

Staring from the moon
in dream,
I watched
small monkeys hopping
from close
cavities: faster,
slower, dragging
their thick brooms
over dry
sands . . .
but
in late evening
light,
beyond their hunched
& bickering
return
in one great
swarm, the planet
now grown
calm —
I saw
a single giant
millipede,
shell vibrant
mustard/black,
crawl out
from the moist
hollow
of its hidden
rock
to sweep
with silent feet
along the
moss

“Earthworks” was published in the Winter 2009 issue of the Notre Dame Review.

Posted by redefteditions at 8:57 AM 2 comments:

Our first video in this post arose from the poem “Sketching the Assyrian Reliefs, with My Wife, at the British Museum.”  Let me just say that
each time Dan and I stand before those ancient lion-hunt friezes, we wonder: How could an artist have sculpted these exquisitely sensitive images
of such a brutal ritual of slaughter? This paradox says so much about that haunting dichotomy of human nature.

"Sketching the Assyrian Reliefs, with My Wife, at the British Museum"


Sketching the Assyrian Reliefs, with

My Wife, at the
Were it not mere alabaster, hewn
the better portion of 3000
civilizing years, the Dying Lioness
of , writhing in the grey
spew of an archer’s flank-sprung
shaft, would continue,
year on year, to writhe
on the black friezes
of tossed sleep, to nudge
with her bruised snout
and dark closed eyes
into our dreams, like
painful words
that sputter eons to rekindle
in the corners of
the mind, like hunters’ fires
verging on our harmless
seekers’ lives — stalking
the beautiful, found rarely,
never uncombined
with pain.

Soft sculpture of the morning.  Sunlight rose on their swollen breasts,
where they roost on the hard blackness of the power
lines.  Coo gently as we pace upon our

early walk, beneath.  Who says an artist's vision, true enough,
can't change the living world — the way, forever after,
that we see: merging craft with blood's

sculpture, in glass cases, that he surely saw, as we had, in the British
Museum halls.  And thought, as we, how they’d reminded
him — beyond their ancient lore — of sun-tinged

hills / or the soft breasts of cooing doves / before the rush of day.


*“Sketching the Assyrian Reliefs, with / My Wife, at the ” first appeared in the literary journal, Epoch (Cornell University Press), and later in Dan’s
first full-length volume of poems, The Artist and the Crow (Purdue University Press)  //  “’s Doves” first appeared in the final issue of the journal
Diner, and was later reprinted in the International Poetry Review (UNC, ) in its original form.  This revised version will appear, alongside “Assyrian Reliefs,”
in Back to the Source: Selected Poems & Parables [ Press, 2018].
Posted by redefteditions at 4:33 PM 1 comment:

We Find a Spotted Salamander . . .

Welcome to Red Eft Editions!  We've chosen this logo for our venture in mixed-media collaboration because the Red Eft (or Eastern Newt) has long intrigued us with its ability to pursue a uniquely “double-life” on land and beneath the water.  So in our own pursuit of artistic adaptation in the digital age, we’re here presenting our personal blend of naturalistic poetry and painting in the contemporary “habitat” of the internet.

Here, then, is our first video-collaboration inspired by the visual wonder and moving fate of another member of the salamander world, the Spotted — a local
species we've ritually walked to witness mating in our flashlight beam, on those first warm nights of February rain, in a neighbor’s temporary pond.


We Find a Spotted Salamander, Drowned . . .

Before you praise Spring’s advent note
What capers the mad wind may cut:
To cast the flowers to the waves
And overturn the fishing boat.
— Tu Fu

We find a spotted salamander
drowned
in violent storm the night before,
tail stiffly poking
from its matted bier of risen silt
and weed.
Odd surprise to spot
her rubbery coldness—there:
in the vernal pool
we walk to on spring evenings
to observe new life.
Now rake
its bloated corpse to pondside
with a fallen branch
through sable sheets
of floating scum — in the twilit
glimmer of the stirred-up pond —
to probe its fate
more closely.  Amazed
by the luminous stream of eggs
still oozing
from her birth canal
and clustered round her limp
back legs and slate-blue tail,
like perseids
bejeweling the numbed heavens
after chaos. 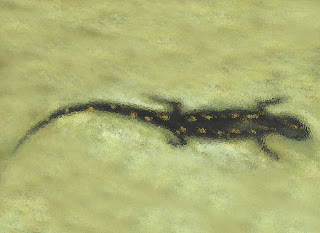 Posted by redefteditions at 3:42 PM No comments: