Back in the 1970s, when still living among the cornfields of Illinois, I remember listening—spellbound—to my father-in-law’s bold
resonance when reading us his translations of Shinkichi Takahashi’s contemporary Zen poems. Four decades later that voice
blent with a Japanese poet’s vision moves me still—stirring the cycles of life and death while I paint the wavy image of a conch.
And inspiring me to weave that painting into a video combining both their spirits with my own.
-- Suzanne

Nothing, nothing at all
is born,
dies, the shell says again
and again
from the depth of hollowness.
Its body
swept off by tide—so what?
It sleeps
in sand, drying in sunlight,
bathing
in moonlight.  Nothing to do
with sea
or anything else.  Over
and over
it vanishes with the wave. 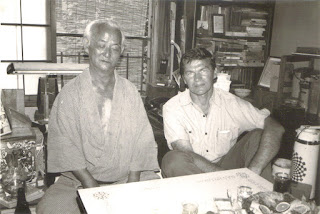 Dan’s father, the American poet and translator of Buddhist
literature, Lucien Stryk (1924-2013),* was instrumental in
bringing this highly unorthodox Japanese writer (already
locally renowned for poems melding experimental
freedom with traditional Zennist thought) to the attention
of the English-speaking world in Triumph of the Sparrow
(Grove Press), a comprehensive volume of the
Zen-inspired poetry of Shinkichi Takahashi (1901-1987).


*See "Featured Post" (top left of this page) for a video based on two of Lucien's original poems.

Posted by redefteditions at 10:26 AM